Photo (and all the rest of them too): Steven Godbee

In 2015 the Australian Brandenburg Orchestra collaborated with contemporary circus ensemble, Circa to create a pasticcio around music of the French Baroque. They’re back for more in 2017, this time with a Spanish-themed pasticcio. Circa’s artistic director, Yaron Lifschitz, has let his imagination loose on the image of the bull ring, taking inspiration from thrumbing rhythms and plangent emotions of Catalan song. ABO’s artistic director, Paul Dyer, has spiced up his ensemble with baroque guitarist Stefano Maiorana from Rome, soprano Natasha Wilson (pictured below) and a medley of old and new arrangements.

It’s a terrific show. The eight performers surprise and delight, impress and astonish with their repertoire of tumbling, rope-climbing, trapeze work, silks and physical theatre. Their balance, strength and grace are constantly amazing and they heighten the audiences engagement with a subtle and often funny overlay of character acting.

We interrupt this review for a quick announcement. Normally at this point I’d be asking you to visit my book project, now crowd-funding at Unbound. However, today, I would rather that you went to www.fairgofairfax.com.au to read about the cuts to editorial staff at the Age and the Sydney Morning Herald. I’m still a Herald contributor, in theory, but the arts coverage has shrunk dramatically, so I rarely get a gig these days. Luckily for me, it’s not my bread-and-butter, but it’s devastating and not just to the journalists. In my neck of the woods the whole arts eco-system suffers when intelligent and in depth coverage is curtailed. Without the support of mainstream media, you’re stuck with the likes of me and the rest of the inter webs. Please let Fairfax know if you’re happy, or not, with this situation, and please let artists, arts writers, bloggers and arts companies know too! Thank you. Now read on.

The musicians — just one to a part — are ranged across the back of the stage, with Circa artists in front and singer Natasha Wilson drifting in between the two. The band plays with high energy and patchy brilliance; the improvisations don’t always click and the energy doesn’t always make it past the acrobatics, but when it does, it’s thrilling. Natasha Wilson, making her Australian debut, sings with unfettered clarity and a slightly other-worldly detachment, giving the heart-on-sleeve ballads a tantalising sense of mystery.

On one level it’s good, old-fashioned acrobatics, with a classy backing band and bull-fighting theme. On another level, it’s an attempt to create something bigger – a synthesis of art forms which bounce off each other to create something new. Does it work? Yes and no. As a rip-roaring display of musical and physical virtuosity it is hard to beat: I challenge anyone not to gasp and grin during the performance. As a pasticcio it’s less convincing for me — if there’s a narrative in there, it comes and goes, with human drama upstaged by spectacle. There are so many moments of genius — the red wheelbarrow as bull and bull-fighter’s cape, for example, and the bull-fighters (bulls?) charging across a tabletop — that it feels like overthinking it to get stuck on genre-bashing.

Ultimately, Spanish Baroque has all the makings of a festival piece, a show which could tour anywhere in the world. Fortunately for me, it all started in Sydney. 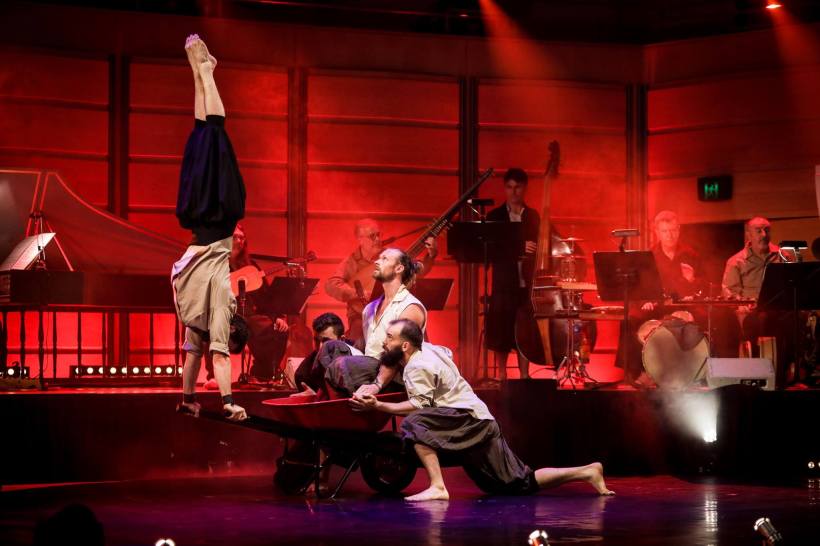 Further performances – Friday, Saturday 5 and 6 May, Wednesday and Friday 10 and 12 May, all at 7pm, and a 2pm matinee on Saturday 6, all in City Recital Hall, plus two performances on 12 and 14 May at Melbourne Recital Centre and one performance at QPAC in Brisbane on 16 May.

Harriet Cunningham – aka @harryfiddler — is a freelance writer based in Sydney. Harriet wrote her first novel, about a runaway cat, at the age of 7. In the forty year gap between novel 1 and novel 2 she moved from London to Edinburgh to Sydney, ran an opera company, played violin on the opera house stage and sailed from Gove to Darwin. She is now a music critic and writer, best known as the critic who got banned by Opera Australia. She still hangs out at the Sydney Opera House, is still trying to get that novel published, and still plays the violin.

I'm writing a book! Please come and view my author page at www.unbound.com/books/sanctuary and then pledge lots of money. Alternatively, send chocolate.